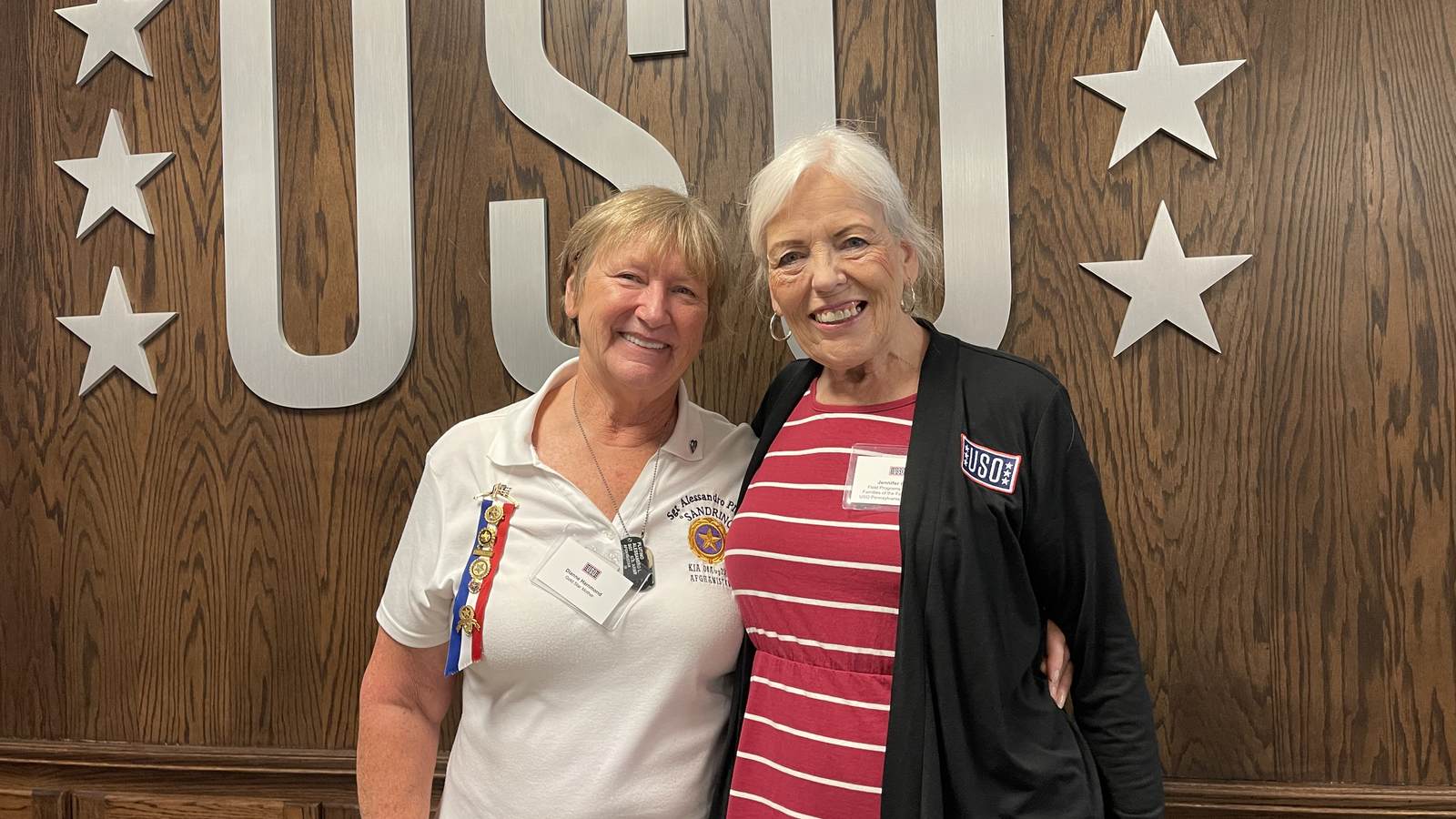 Dianne Hammond stood in front of the auditorium at Fort Indiantown Gap filled with members of the Northeast Regional Advisory Board readying herself to share the story of her son Sgt. Alessandro ‘Sandrino’ Plutino – a story she has shared countless times since 2011. It is a story about love, loss, grief and what comes after for Gold Star Families.

“He is the reason I am in this position,” she started.

That position is one of a Gold Star Mother and a USO volunteer.

Hammond lost her son and a piece of herself on Aug. 8, 2011. He was killed in action while on his sixth deployment with the 1st Battalion of the 75th Ranger Regiment in Afghanistan. It happened only an hour and a half after Plutino spoke to his mother to reassure her he wasn’t one of the service members killed in a helicopter crash.

Due to the nature of his job, Hammond knew it was always a possibility her son would not come home. Plutino knew it too. When he was 24 years old, he sat on his mother’s bed and explained his decision to join the service. He knew she would worry about him and that she loved him, and he told her he didn’t want to die but that decision was not his to make. He said to her “only God knows.”

It didn’t matter how many times Hammond tried to steer her son down a different path – and she admittedly did it often – Plutino only saw a future in the military. It was his childhood dream; one he knew he wanted to achieve since the age of 4.

Plutino’s initial plan was to enlist when he turned 18 but decided to follow his mother’s advice and attend college. When 9/11 happened, Plutino was in his first semester of college and tried to leave to enlist. Once again, his family urged him to finish his degree.

“The day he graduated from college he enlisted,” said Hammond.

Plutino enlisted in the Marine Corps but was rejected due to a shoulder injury he sustained from wrestling. Not deterred, Plutino took to letter writing; passionately pleading his case to join. He spent more than a year trying to become a Marine, but when nothing came of his efforts, he set his sights on a different branch.

That is how Plutino became a Ranger.

In the Rangers, Plutino found a team. A brotherhood. A family. Hammond acknowledged her son was incredibly happy in his position and “loved everything he did.”

Plutino was a rifle team leader for Company B and completed three tours in Iraq before finding himself deployed to Afghanistan. His sixth deployment was supposed to end in March, but he decided to extend it when his team was given a special mission. He knew he couldn’t leave his team at such a moment.

Months later, Plutino would lay down his life for his teammates and his country.

After the loss of her son, Hammond struggled to be present in her life. The weight of her grief made it difficult to find joy in the world around her. At a TAPS event six months after her son’s death, Hammond met a USO volunteer Jennifer Hodur who suggested volunteering at the USO could help.

Initially, Hammond was unsure this was the path for her. Even after she learned about the USO’s Families of the Fallen program, Hammond thought her grief was too raw to commit to volunteering.

She did agree to observe USO volunteers during the program at Philadelphia International Airport. Hammond didn’t plan on making her presence known but, when the family’s flight was delayed, she found herself bonding with the mother.

“I just sat and talked to the mom for an hour and a half, and I thought ‘I can do this.’”

Ten years on and Hammond continues to provide support and empathy to families after they receive the devastating news. She draws on her personal experience to guide the families through the process. While Hammond personally didn’t go through the program for her son’s dignified transfer due to her proximity to Dover Air Force Base, she understands how confusing and rushed the families feel.

“You don’t even know that you’re breathing still,” explained Hammond.

After families are notified, they must find their way to Dover within 24 hours. Many end up packing in a rush and taking multiple flights before they land at Philadelphia airport. The families are usually exhausted, confused and, of course, grief-stricken.

This is where Families of the Fallen comes in.

The goal of the program is to provide comfort to the family and alleviate their burden when it comes to the logistics of getting to and from Dover. The Families of the Fallen volunteers are there every step of the way.

When families land in Philadelphia they are greeted by USO volunteers who make sure food is available in the Families of the Fallen lounge. It is a quiet area where the families will not be disturbed as they wait for their transportation to Dover. After the dignified transfer, families are again greeted by USO volunteers at the airport. The USO works with the airlines and airport security to ensure the families navigate the airport with ease and without issue. Volunteers even sit with the families at the gate and don’t leave their side until the plane takes off.

What Hammond and other Families of the Family volunteers offer may seem insignificant in the grand scheme of things, but most families find the simplest tasks unbearable when they are trying to comprehend their loved one is gone. Hammond said some families don’t register the volunteers going out to Dover but, when they come back to the airport, most will recognize they couldn’t have gotten through the process without the help of the USO.

But it isn’t just the families that get something out of the program.

The impact on me helping other families was immense,” said Hammond. “I think, in some ways, it saved me.

Through volunteering and telling her story, as well as the Honoring Sandrino’s Sacrifice Fund, Hammond keeps her son’s memory alive and ensures his sacrifice is never forgotten.